Well things move on and we sold our Flair, briefly reverting to a caravan before we got the calling for another camper van.  As mentioned on other pages here we now have the Hymer Exsis and all the above rationale came back into play and we have bought a Peugeot Metropolis and Arnitage transverse MP3 trailer (which we are in the process of modifying to suite the Peugeot) 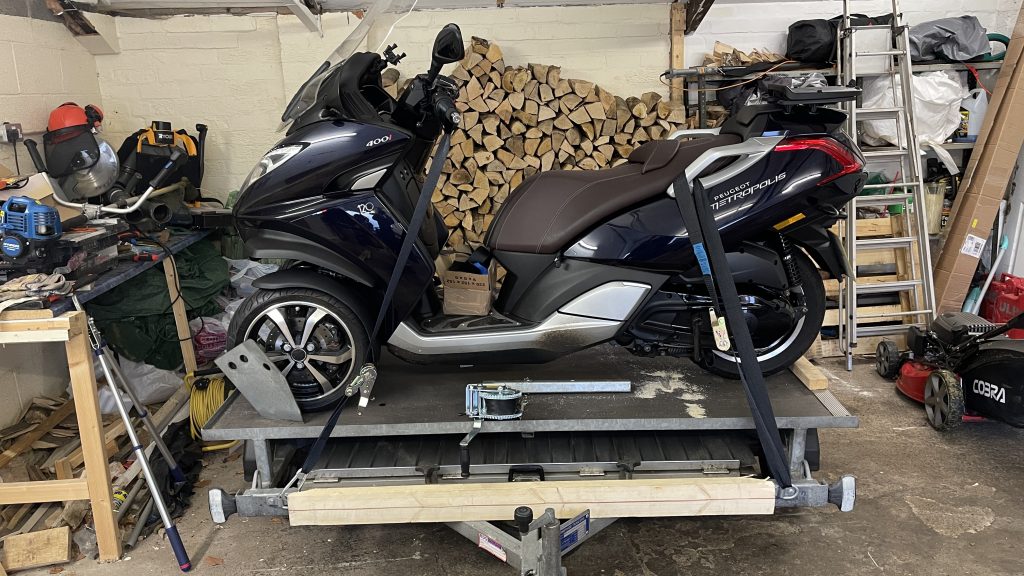 Having collected our trailer I now have to work on how best to modify it to suit our needs.  The first pressing problem is loading the Metropolis as the standard Armitage ramp is too short and the trike “bottoms out” when loading.  Interestingly several MP3 owners have commented on this and I’m surprised that Armitages charge extra for longer ramps (given that they say it has been designed for the MP3)  In the end is was easier than I thought.  Using a simple 2 mtr plank of wood down the centre of the original ramp did the trick – in the short term.  One issue that arrived after using the Armitage ramp (even modified) was that we needed two people to load and unload.  This is because the Armitage ramp is flat and you need to keep an eye on the wheels to keep the bike on the ramp.  After our last trip to France I decided to ditch the Armitage ramp and buy a pair of alluminium ramps from eBay.  Still cheaper than Armitage but these new ramps have a “safety edge” that keeps the wheels from rolling off so I can load and unload single handed.

The second problem is that the Metropolis front wheels don’t fit into the two retaining scoops on the trailer so I need to cut them down a little.  Again much easier than I thought with an axle grinder. I’m not convinced that the mk 2 Armitage trailer is a good answer.  They have removed the scoops and fitted a rail across the front but I think the scoops would stop the trike from sliding while moving.

The third problem (and this is my problem not that of original design) is that I would like to be able to load and unload the trike when not connected to the motorhome.  This would give me the freedom to manauver the trailer when loaded when at home without running the risk of the trailer tipping over and dumping the trike on the ground.  I intend to do this by fitting a second jockey wheel to the rear of the trailer primarily as a stabiliser but also with the ability to move it around as necessary.  More later.