Having just returned from an excellent six weeks trip touring around France I thought it may be helpful to anyone thinking of braving a trip. The paperwork and testing is changing all the time so check the latest regulations before you commit.

At Eurotunnel the paperwork required for entering France was non-existent. This is surprising given the huge differences in infection rates between the two countries.

Paperwork on UK side was confusing and changeable as mentioned above this seems odd.

It became obvious that booking with the Caravan Club was a mistake as Eurotunnel doesn’t recognize any CC bookings so you cannot enter all your details on the Eurotunnel website that allows you to speed up the arrival process. This not only caused a 20 minute delay at either end but resulted in missing our train and having to wait another hour for the next one. Ferry crossings are Caravan Club freindly.

We thought the French may have been a little “hostile” following BREXIT but we found no sign of it. The French were very friendly and charming without exception.

It would be difficult to get around and enjoy France without the French “Pass Sanitaire” their equivalent to our NHS Covid Passport. This is needed if you want to go into any restaurant, bar or venue. Everyone used them on their phones or if no phone then a paper certificate. There were no exceptions and everyone we saw / met complied. The French recognize the NHS Covid certificate and the barcode used by the NHS can be used to create the Pass Sanitaire. We used this all the time. The passport was updated every day with covid numbers and highlighted areas of higher infection rates – something our lot should be looking at.

It is against the law to enter any shop without a face mask (fines of € 137) there appeared to be no exceptions and again everyone complied. This made us feel more safer than when in the UK.

Understandably with all the covid restrictions etc. the Vicarious Books publication “All the Aires” was way out of date regarding prices and to a lesser extent facilities. Unsurprisingly Aires, particularly near tourist areas had increased in price whereas campsites had only increased marginally. The publication is in urgent need of updating as there are many new Aires and others have “disappeared”

It had been 5 years since we last took a camper van to France and in that time there has been significant changes. It seems that many local authorities have handed over the running of Aires to Commercial companies. These “commercially operated Aires” that used to be either free or have limited services are now charging between 10 and 18 Euros. That said most of these “commercial Aires” seem to have EHU included in the price. They are barrier operated with fences or hedges with many including the price of the services. (but not all)

There appeared to be fewer “wild camping spots” than we remember and even more surprising the French Camping car owners didn’t seem to mind especially as the Aires now included EHU.

During our 6 weeks in France only once did we see more than one other Brit on any site. Certainly the Brits are keeping away. Oddly enough we rarely saw any caravans of any nationality and certainly didn’t pass any Brits on the road.

It was true to say that since our last visit in 2019 food prices have risen but not significantly, so with fuel a few pence per liter cheaper than UK.

We don’t have a pet so cannot comment on how easy or difficult it is to take pets into the EU and as there were so few Brits we had nothing to compare with.

Enough of the entry / exit stuff so here is the trip: –

This was the first trip in our “new to us” Hymer Exsis and I have to say having spent 42 nights and traveling 3000+ miles we had no problems (well not exactly true as the reversing camera decided not to work before we reached Eurotunnel) We achieved just over 30 mpg – a massive increase over our previous NB Flair.

We traveled to Folkstone and stayed the first night at the CC site outside Folkstone, catching to morning Eurotunnel train the next day. We had decided to stop at Honfleur for 3 nights to revisit the area having last visited some 12+ years ago. The Aire is pretty much the same and the only difference we could see was that there are more EHU points and I guess that reflects the technology and our relience on it in these modern times. 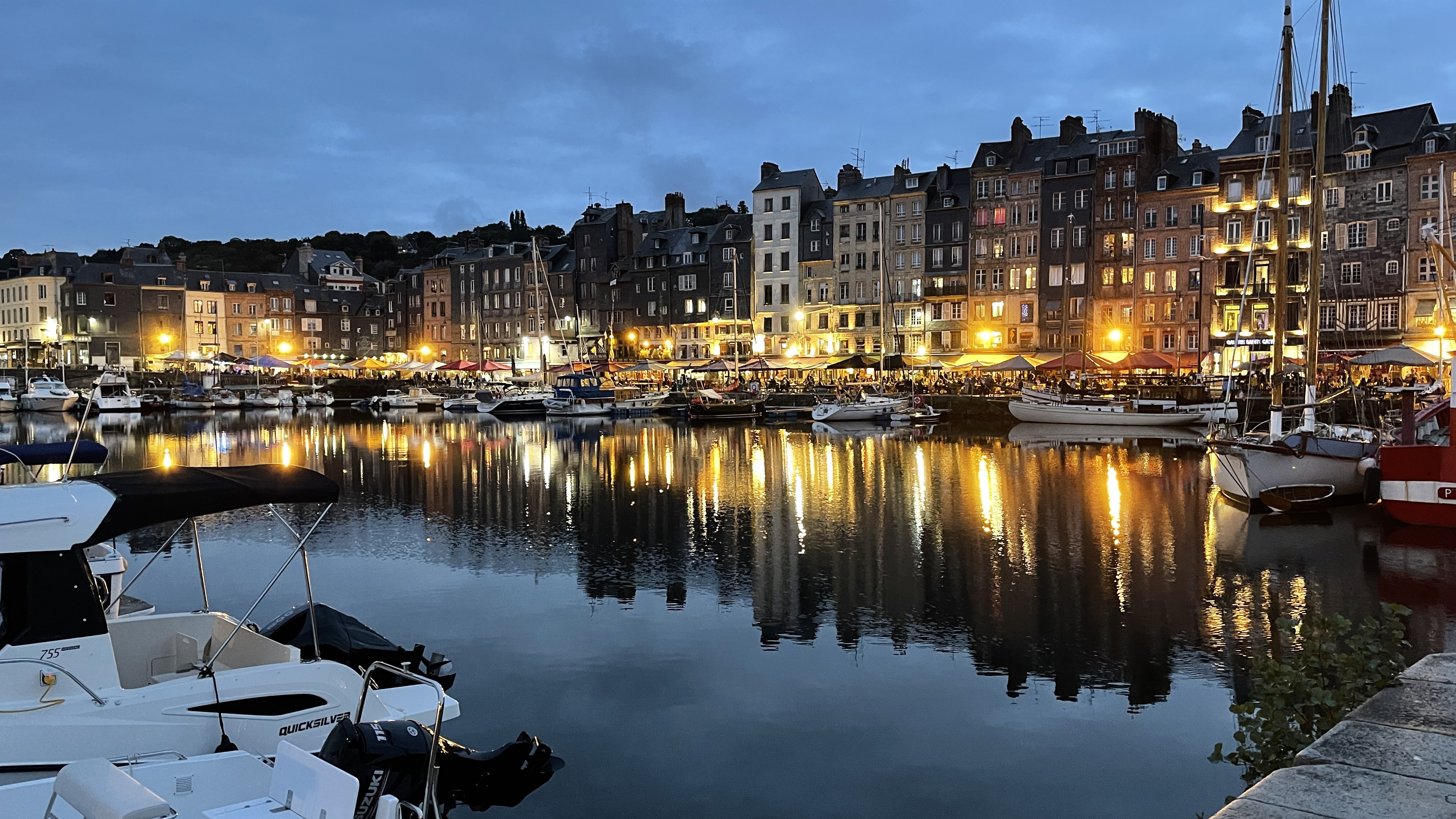 From Honfleur we drove to Sarlat, staying at the Aire just outside town. Nothing changed there and having revisited the town we moved on to Roque Gageac – another old haunt from both caravan and motorhome days. From here we moved on to Rocamadour and eagerly awaited the arrival of the family having not seen them since briefly in 2020.  This is one place that has changed tremendously.  All the Aires are “commercialised” and standardised on price – €18 per night with no EHU.  There is a new road from L’Hospitalet to the top of the fenicular going around the rear of the old road (which is now a footpath)  We stayed at the campsite at L’Hospitalete as it was the same price €18 – but included EHU, toilet block, laundry room and swimming pool.  While it didn’t spoil our meeting it did rain much of the time however we barely noticed it. We took the family around Rocamadour and did the tourist bit complete with BBQ and two lunches in one of our favorite restaurants.  The kids even managed to have a swim.  The family left us on the Sunday afternoon and we left Rocamadour on the Monday (in rain) and traveled to a new area staying the night at Lautrec where thankfully the rain stopped and we were able to explore the lake and have a leg stretch.

The following morning we moved on to another new spot – Monze. Monze is a small village outside Carcassonne set in the middle of vines and is famous mainly for its Roman Bridge.  Having had a good walk among the vines we then moved on to the Aire at The Cite next to the Carcassonne campsite.   We had discovered on our last visit to the campsite that the campsite owners are not very helpful and their prices are on the high side (€28,50 in low season.  The main no no for us is that when our grandchildren visited us they charged us €4 per visitor – that’s €24 every time they wanted to come on site – even for an hour after school.  Hence the Aire this time however it was not our best move as it turned out to be the most expensive Aire we stayed at the whole trip and it didn’t include EHU or services.  After 3 days we moved to Villamoustausou for our longest stop while meeting up with the family.  We have stayed at the Camping Les Pinhire some 3 years ago in our then caravan.  Not a lot had changed in that time other than ownership of the campsite.  The new owners were very friendly and helpful and turned out to be the most covid conciencious owners we came acroos as they fumigated every toilet, shower and washing area at least four times every day.  We didn’t get much time to re-explore the area as we wanted to spend time with the family – we have been visiting Carcassonne every year for over 15 years so the family came first. 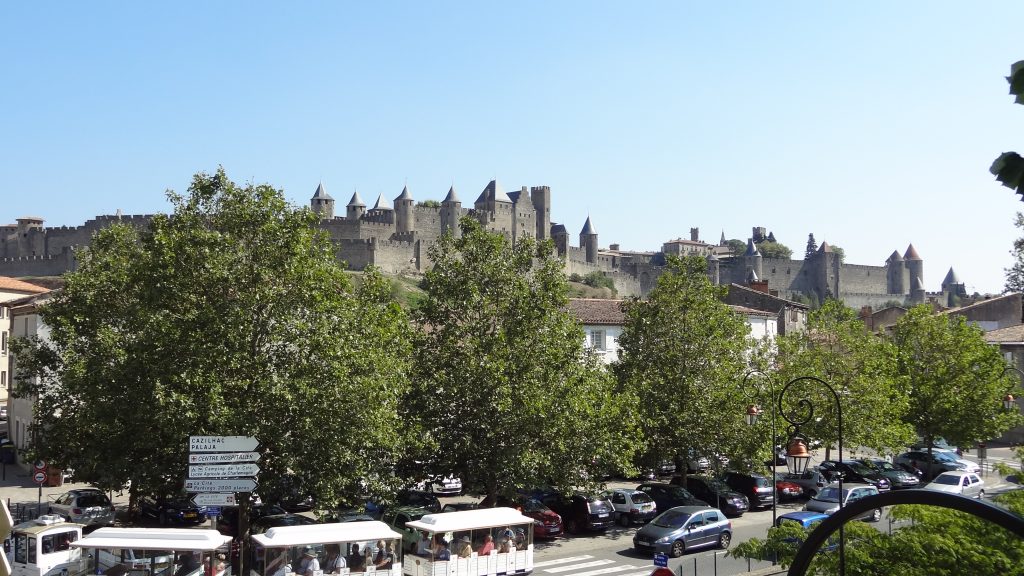 From Carcassonne we moved to an old haunt of ours – Gruissan to the Aire Quatre Vents – this hadn’t changed a bit though we were surprised how busy it was for mid October.  The family joined us for our last day after which we set off north.  We had intended to travel north east to the Alcsace however studying the weather we decided to go North West to the Ile de Re, first stopping at Marmande for a couple of nights.  Marmande is an ideal stopover for anyone travelling down to the South West and on into Spain.  Although an aire it was once the camping municipal and has more EHU points than pitches.  It is located just outside the city walls so convenient for visiting the shops/restaurants etc.  We were lucky as the weather was fine but I could forsee it becomming muddy in winter unless you stick to the paved lines. 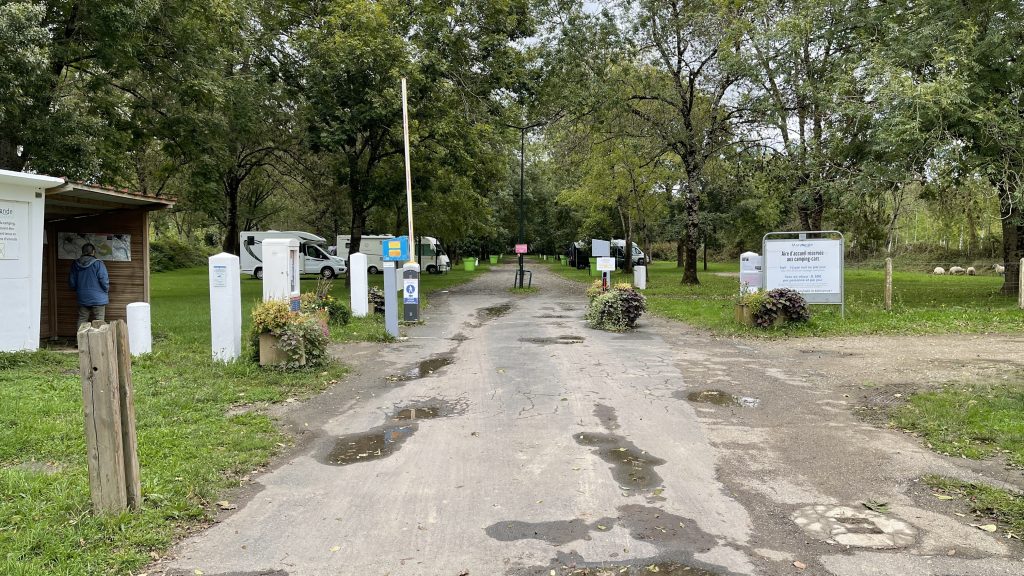 From here we travelled to St Martin’s on the Ile de Re, stopping at the Aire just alongside the municipal campsite.  The Aire was very busy and by early afternoon it was full with many campervans having to turn away.  The campsite next door was fairly empty but at €28 per night verses €10 who can argue. 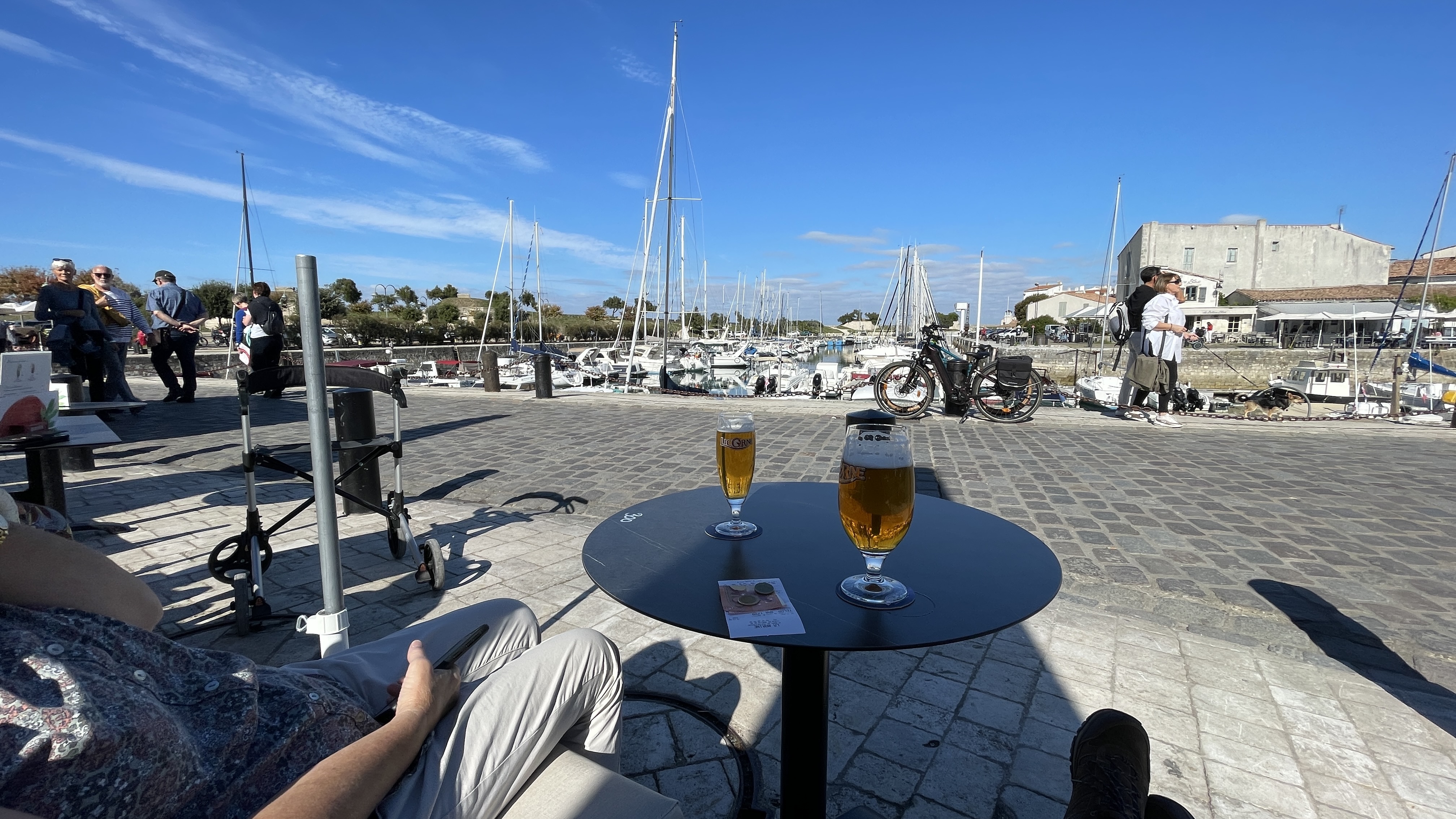 We spent over a week on Ile de Re moving to both the north and south of the island and completing cycle rides to all the major tourist spots.  While there are still one or two wild camping spots on Ile de Re the quality of the aires has improved quite a lot with pretty much all of them having EHU, water and waste disposal along with security gates and fences The weather was superb – warm sun with clear blue skies and little or no wind.  It did start to get cool each evening but that didn’t worry us as it quickly warmed up during the day. The aire at  Saint-Clément-des-Baleines is a typical example as shown below. 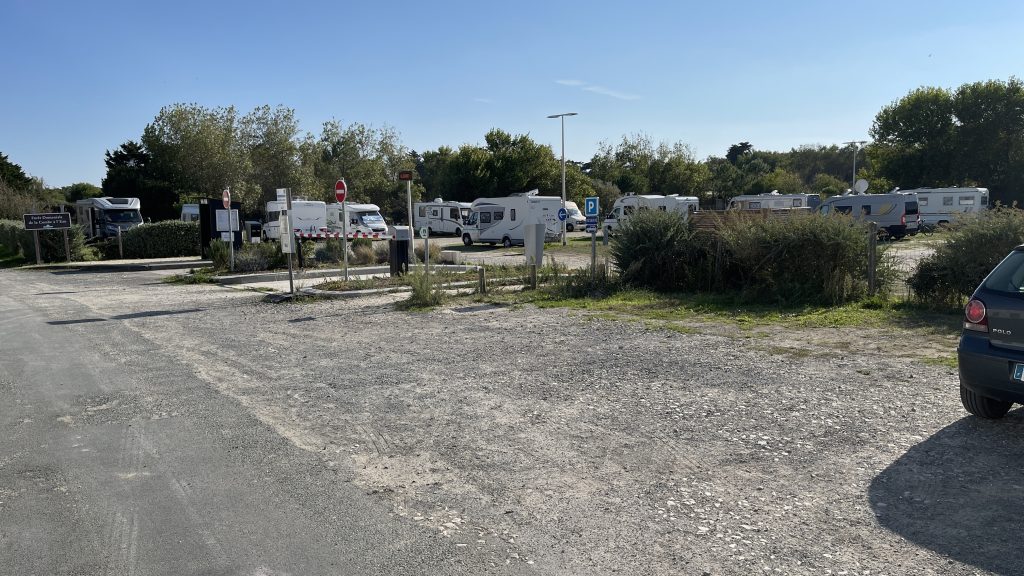 From Ile de Re we moved to Chartres to see the Chartres illuminations.  22 sites around the city that are flooded with coloured lights.  The only drawback was they didn’t start until 9pm and that involved walking through an unlit wood that was quite creepy- good job we took our torches.  We stayed again at the camp site Board del a Eure but perhaps that was a mistake as we discovered that there is an aire some 200 mtrs away that is an official aire and while there are no facilities it is ok for an overnight stop or two. 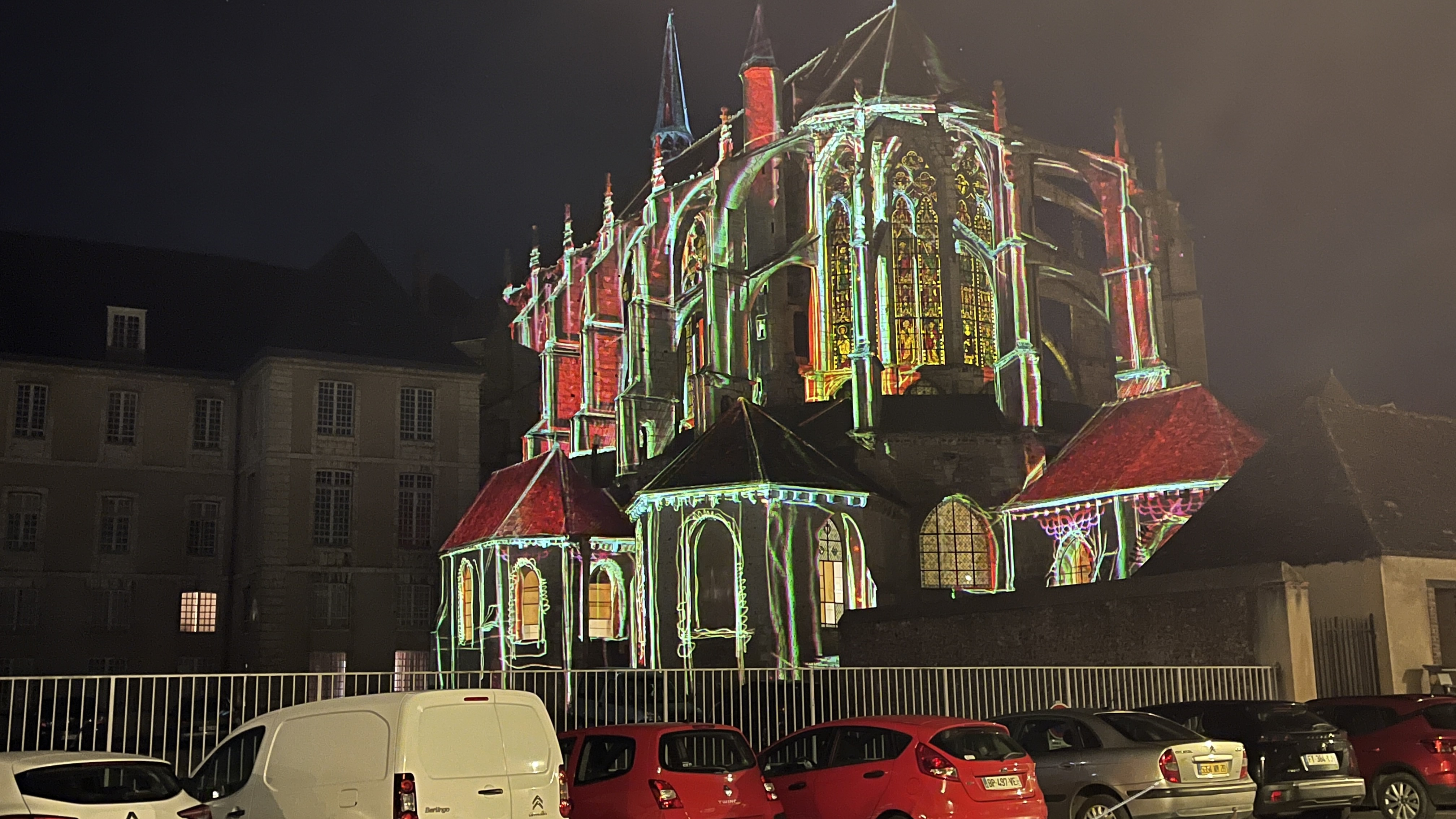 From Chartres we moved to Le Treport and stopped at a new to us Aire at the top of the cliffs. There are two co-located aires but only one has a service point.  Both charge the same price (€7 per night – 2021) but the upper one has proper marked out tarmac bays while the lower one of more uneven grass and hardcore.  View from the top of the fenicular some 100 mtrs from the aire.

Very handy for getting into the town below as it is closer than the other Aire in the town.  From Le Treport it was a short hop to Escalles our final stop in France where we completed our Passenger Locator Form (complete waste of time) in preparation for our tunnel trip then home.