We set off from home on 22nd May and used the Plymouth – Roscoff ferry.  Not the cheapest I grant you but for us the most convenient.  We do find the Brittany Ferries vessel Amorique to have a strange layout but it does the job and Roscoff is a good starting point.  This year we had decided to try out the Isle D’Oleron approximately 100 miles south of La Rochelle.  We had taken everything including the kitchen sink with us and this would be our first real outing with the caravan.  We had a couple of long weekends in Dorset and Cornwall to try things out and declared ourselves ready for a 5 week stretch.  This was also our first trip in our new BMW 220D XDrive – more later.   We put the cycles inside the van having removed the cushions from the dinette and found they sat there fine over the axle so not adding to the nose or tail weight.  We caught the overnight ferry arriving in Roscoff around 8.30am local time.  It was an easy run down to Isle D’Oleron and we decided to try out pretty much the first site we came to –  Camping Les Pins (as according to the various books they all offered pretty much the same facilities.  This is located not far from the bridge at the village of Le Grand-Village- Plage.  At first we quite liked the site – quiet, near the village with bars, restaurants and a Super U.however after a few days we realised that perhaps there were too many statics and the site owners were increasing the number of statics significantly while we were there.  Our guess would be that after this season tourers would be hard pressed to find a level slot.  There is a Campervan Aire outside the front entrance that looked worthwhile if you had a campervan. 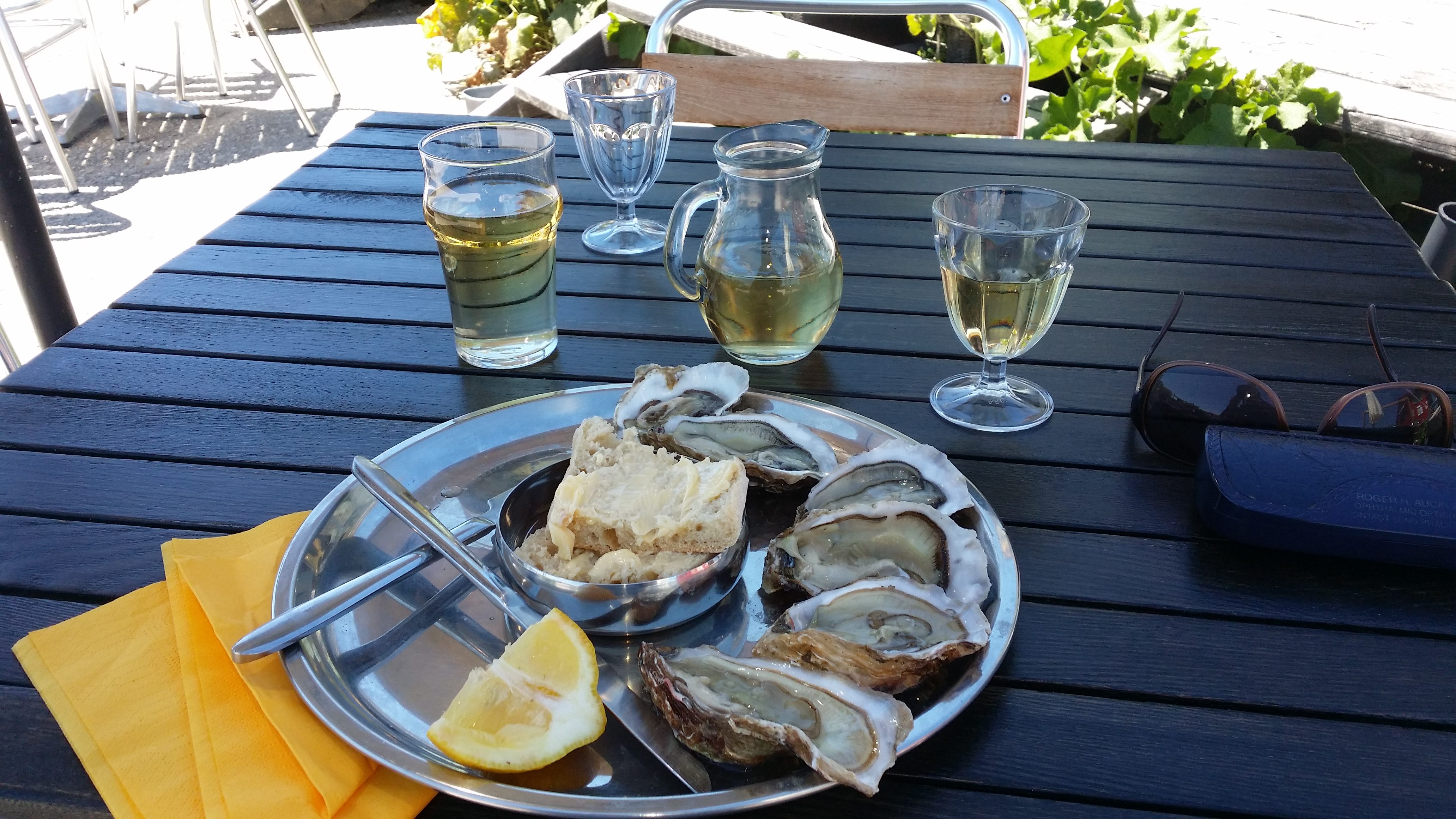 We stayed on Oleron for over a week and spent each day either walking or riding to the various villages/attractions.  In fact we clocked up over 120kms on the bicycles alone which wasn’t bad considering every day the temperatures exceeded 30 degrees.  We even found time to visit one or two or three of the oyster farms and sampled the oysters all washed down with wine and cold beer. 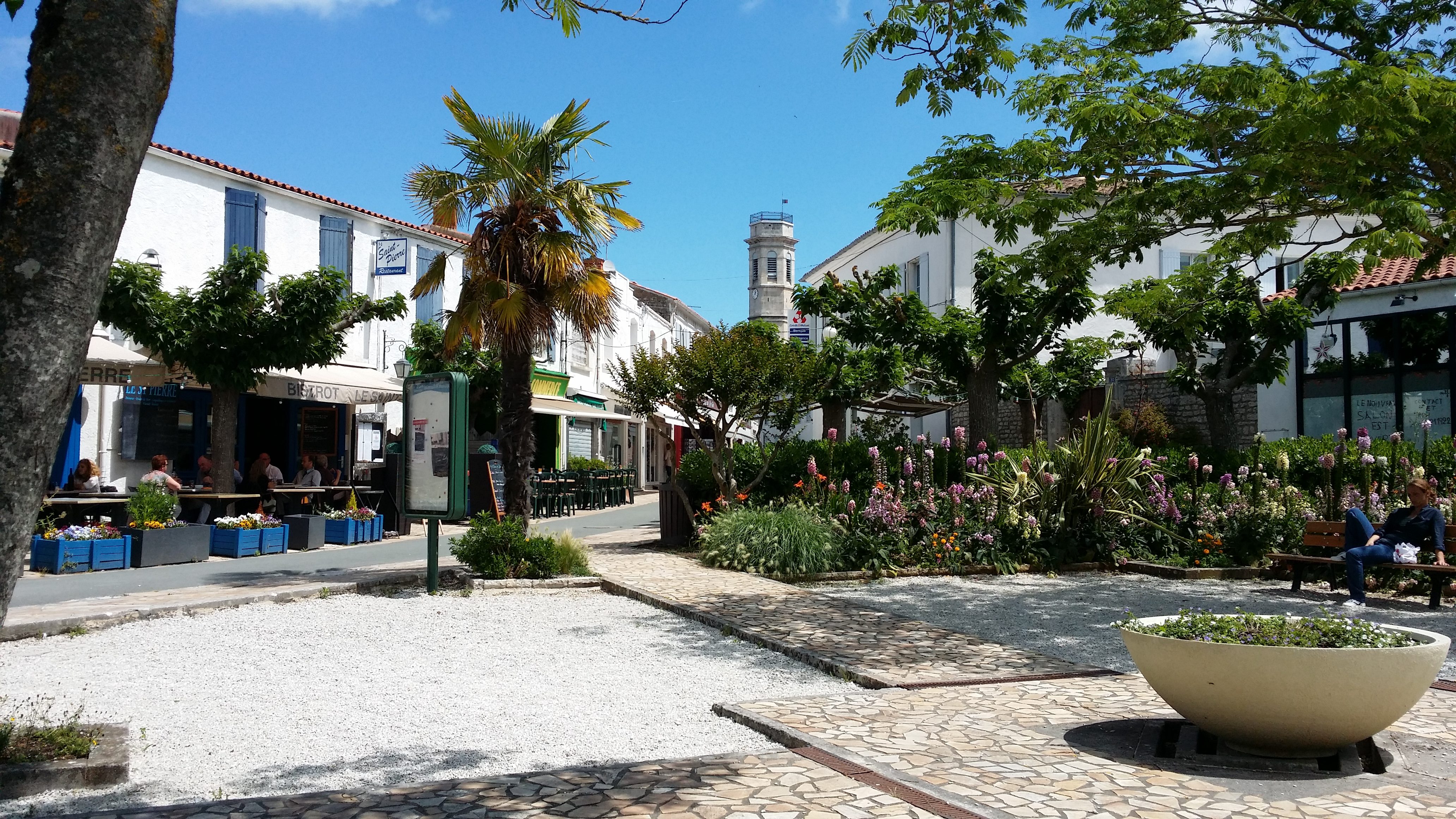 From Isle D’Oleron we headed south east to Carcassonne where we spent the next two weeks visiting the family and being entertained by the grand children.  Our intention was to complete the refurbishment of window shutters but the sun beat down too heavily and we succumbed to the heat of over 30 degrees every day with the result that we only completed 6 out of the 10 remaining shutters – next time…..

We have concluded that this will be our last stop at Camping La Citie as the restrictions and fussiness proved too much for us not to mention the cost.  To elaborate we were visiting our family yet the site have severe restrictions on visitors and charge between €3.70 and €4.70 per person per day for visitors including children.  Their rationale was that people from the adjacent Aire were coming in and using the showers and swimming pool.  We pointed out the pool was closed and that our family lived in Carcassonne and have their own pool and showers and that the children were all at school all day and only had an hour or two to visit us each day so we felt that €24 to €28.20 per day for a couple of hours was too much.  They did offer to compromise during the off season but it still involved a lot of hassle.   We have looked around the area and found several sites that while not as convenient would be acceptable and cheaper.  On our next visit we will stay at the municipal site at Trebes – near to the canal du midi and a pleasant cycle ride into Carcassonne while still providing entertainment, cafes etc. in the Trebes village..

We left Carcassonne and headed for the Dordogne where we stayed at Roque Gageac on the Dutch run site of Camping La Plage on the outskirts of the village.  This turned out to be an excellent choice as the site is a well run very clean site with pool, small shop in season and an easy walk into the village.  We stayed here 4 nights and toured around visiting Sarlat, Domme and Cenac as well as cycling along the Dordogne.  Our run to the Dordogne wasn’t without its trauma as we suffered our first tyre blowout on a caravan – and I mean blowout.  The tyre exploded on the motorway (in 38 degrees) and did some serious damage to the underside of the van including punching a hole in the floor, ripping out the waste water pipes as well as ripping off the wheel arch trim and damaging the wheel – meaing we couldn’t get a replacement tyre fitted as the alloy wheel was also damaged.  Scary stuff.

We left Roque Gageac and headed further north to the Loire, staying at a nice site some 8 kms east of Nantes – Camping Belle Riviere.  A very spacious site situated some 50 mtrs from the river with a superb cycle path into the city centre.  Nantes itself is a large city but the old centre is still full of charm with lots to see.  We went round the Chateau des Ducs de Bretagne (free to walk around the walls etc.) then on to the cathedral finally having a Gallette in the old city all washed down with a glass of wine and cidre. 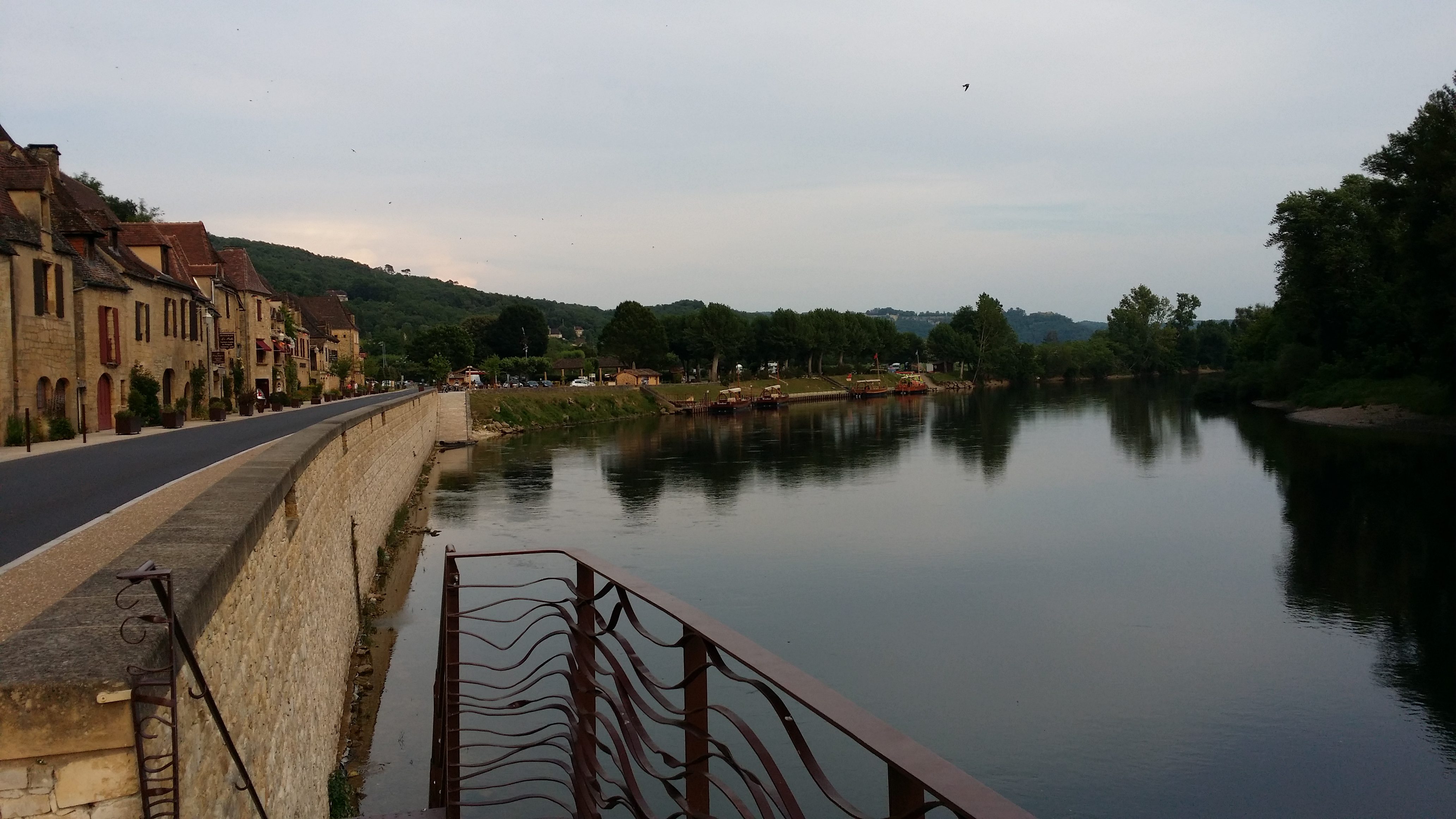 From Nantes we headed north again finally reaching Roscoff where we spent the next 4 days exploring the area. The Brittany coast is a nice area and reasonably flat so more cycling and walking and the offshore breeze helped keep us cool.  We were pleasantly surprised with the area and will most certainly spend a few days there on our next trip.  One oddity was the municipal site Le Bois de la Pallud – very nice set up with clean toilets, EHU and individual pitches in a quiet rural area but a short walk to the village for bread etc.  WHile we were there a notice appeared on the reception door saying the place was closed and any inquiries should be made to the Marie.  Needless to say a fair number of our fellow campers simply upped sticks and left without paying – very odd and naive of the local council.  Still we would go there again. 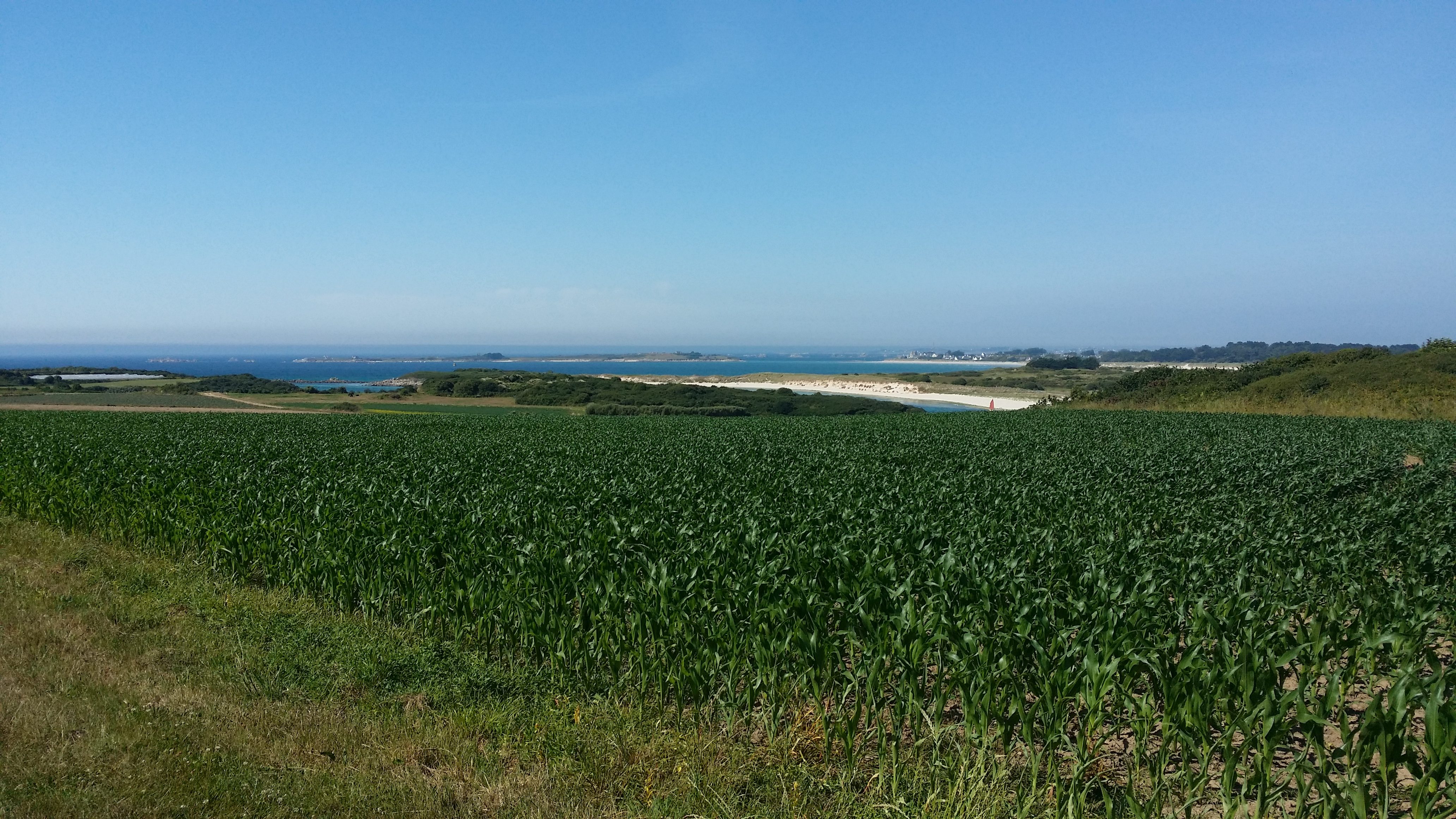 The BMW 220D xdrive performed very well and returned well over 30mpg while towing – a first for me.  We managed to load all our gear in the back of the car (albeit a squeeze) however after the X5 it was a let down.  Mainly because the X5 was such a high spec and the build quality was so much better.  When I test drove the 220 it was the SE version so had the standard seats and standard suspension however the one I purchased was the M Sport with sports seats and stiffened suspension.  We both found the seats uncomfortable and in my case painful on the hip made worse by the harsh suspension.  On our return I happened to notice that the dealer still had our old X5 up for sale and after a bit of negotiating and horse trading we have now exchanged the 220 for the X5 and well pleased.