We decided to make a pilgrimage to Devon and Cornwall again this year as we missed meeting up with many of our friends last year having cut the holiday short following the sudden death of our good friend JB.   The grand plan this year was to spend a week in Cornwall then a few days in Exmouth followed by a few days in Dorset to try and see if there were any areas that would be suitable in the event of our eventual move south into that area.

The weather in April was disastrous so delayed our departure by a week to give us the chance of better weather – or so we thought.  The first clue that everything would not be according to plan was when our friends in Exmouth informed us that they would be away during the period we would be visiting there so a re-arrangement was put together so we could drop in for a day en-route to Cornwall.  A call to our favourite site at Prattshayes to book in for the Friday night was arranged – all back on track again.   The day before we set off we received a call from Prattshayes to inform us that due to flooding the site was closed.  This resulted in spending our first night on the drive of our friends in Exmouth.

The following morning we set off for Treworgans in Cornwall, just south west of Newquay, arriving around lunch time.  We were met at the site gate by the owner, Kathy with two cups of coffee – what a nice touch.  In over 40 years camping this was the first time we had been greeted with a coffee.  The site was very clean and well presented however we were surprised to discover that there was only one other neighbour on the site and this was a Bank Holiday weekend.   Kathy thought is was because of the steep rise in fuel prices and the fact that Cornwall was such a long drive – she may be right.    In fact the whole week was noted for the lack of tourists. 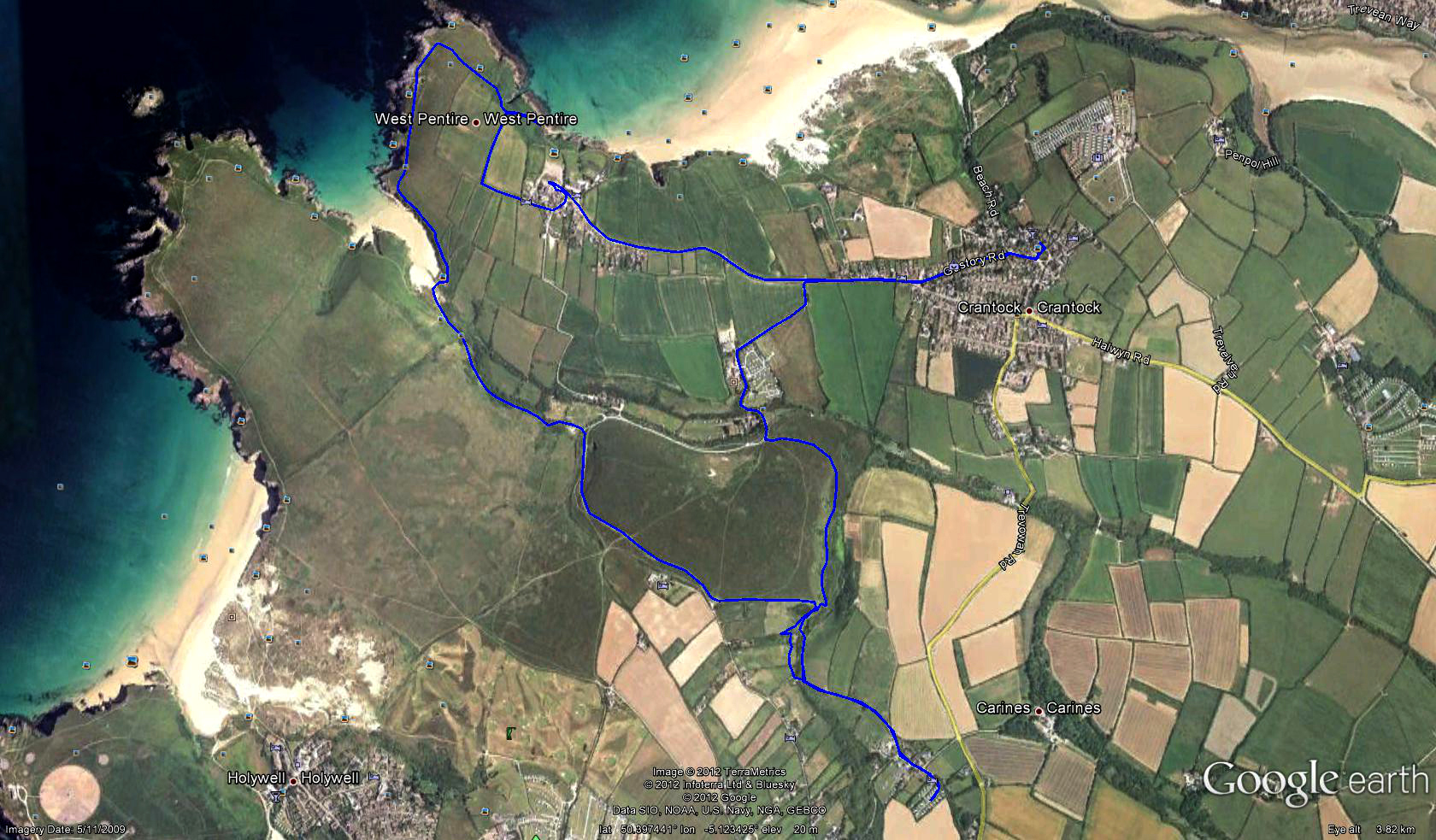 With fine but windy weather we met up with our friends Janet and John and went for a walk around the headland and into Crantock – a total distance of 11.60kms – not bad for a start.   The only disappointment was that on arrival at Crantock the Tearooms that Janet likes so much was closed.  Over the next five days our itinerary had to be “modified” to fit in with the weather which appeared to get worse each day.

On the Sunday we visited the Trelissick Gardens and walked around the park, stopping for a packed lunch in the park gardens – very pleasant.  There was a gaggle of Morgan sports cars, including the famous Aero Morgan, a Jaguar XK150 and Jensen Interceptor all adorning the car park and was fun to look around them.  They don’t make em like that any more….   On returning to the camp site we had a BBQ but ate inside as it was too cold and drizzily 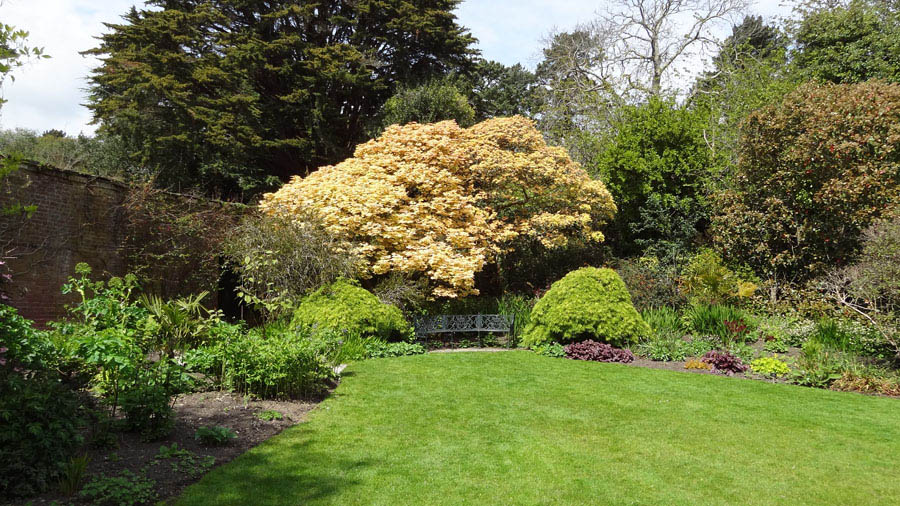 The following day we drove to the north of Newquay to Porth bay and walked along the beach into Watermouth Bay, had lunch and walked back, stopping for ice cream in Porth bay.  We couldn’t go via the gorge around Porth bay so had to brave the dreaded killer steps – both ways.   In the evening we went into St Newlyn village to the local pub for the eagerly anticipated “Pie night” where we had the most enormous turkey and ham pie portion I have ever seen – it was so large that we had to forgo desert. 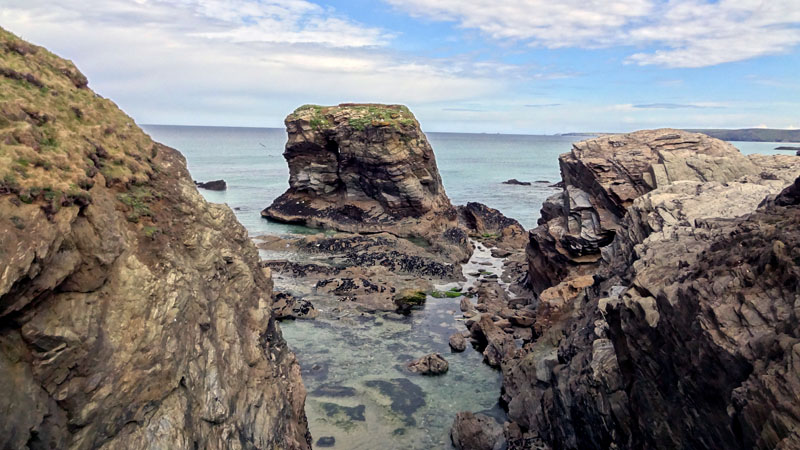 Tuesday was forecast to be the best day of the week and for once they were correct so we headed out to do the walk from Kayance Bay to the Lizard lighthouse.  This must be one of the most beautiful coastal walks in the whole of the British Isles.  The crowning glory was the fresh crab sandwiches served at the cafe on the Lizard Point.  Following the obligatory ice cream we set off back for Kayance Bay with the intention of having coffee at the beach cafe in Kayance beach but on arrival at the National Trust car park with an incoming tide and lack of enthusiasm for the 60mtr walk down the cliff followed by a 60 mtr climb back up we decided to pass. 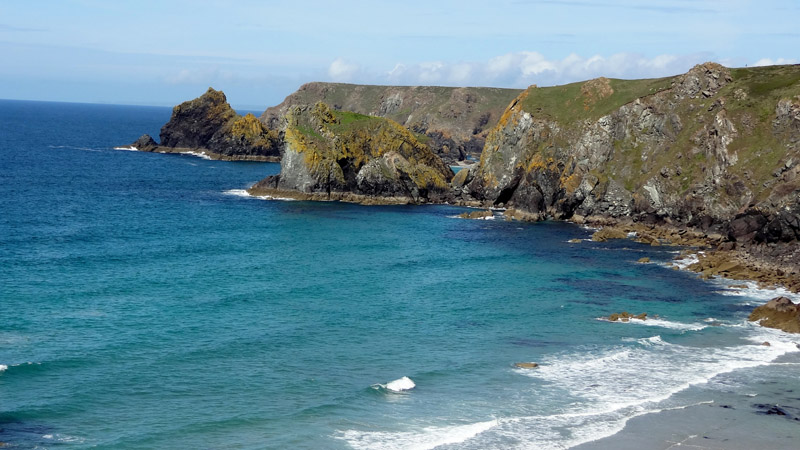 Wednesday was a very wet and windy day that caused us to modify our plans again so we headed off for a day at the Lost Gardens of Heligan.  This turned out to be very satisfying and interesting so much so that we ended up spending around 5 hours walking around the various parts even though the rain was lashing down.

The Lost Gardens of Heligan 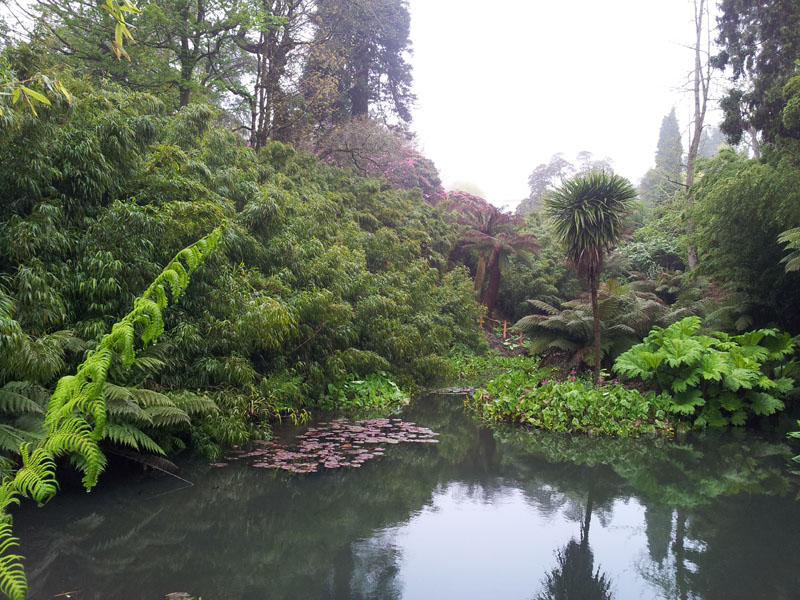 The history of the Lost Gardens and the obvious effort that has gone into renovating the whole area makes it a must see place for anyone visiting the area.  We will certainly visit there again.  Wednesday was fish n chip night in the pub at St Newlyn’s so back we went in the evening to feast on a great plate of cod and chips – all for £6 – good value for money. 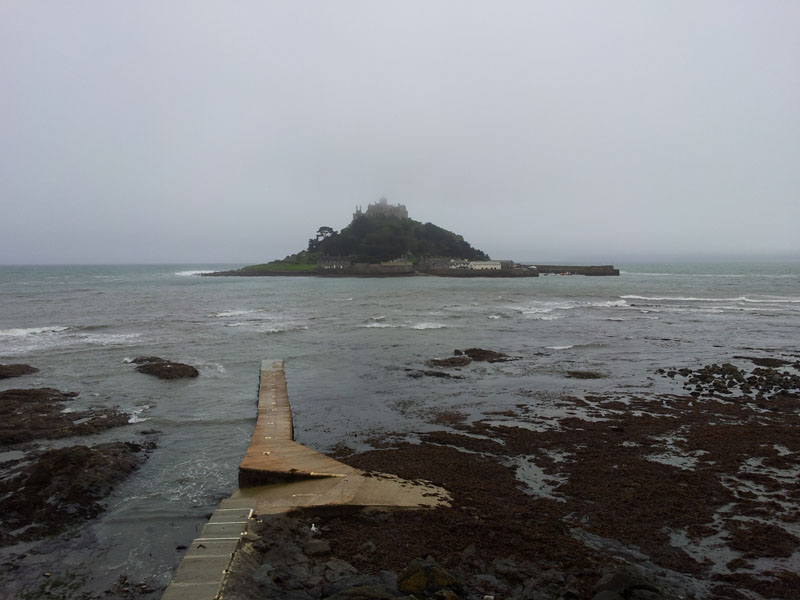 Thursday was another wet and windy day so we headed off to Mt St Michael and Marizion. Another place to visit when the weather isn’t up to par as you can walk around the castle on the island once the tide has gone out.  Don’t miss the gardens around the eastern edge of the castle – well worth a visit.    We contacted Prattshayes to check up on whether they were open or not and were not too surprised to discover they were still closed due to flooding and with a gloomy forecast for the following week we decided to again cut our trip short as with nowhere to stay and wet and windy conditions it would not be fun driving around visiting folks on Peggy (our MP3) and arriving soaked.   We will return to Exmouth as soon as the weather picks up. 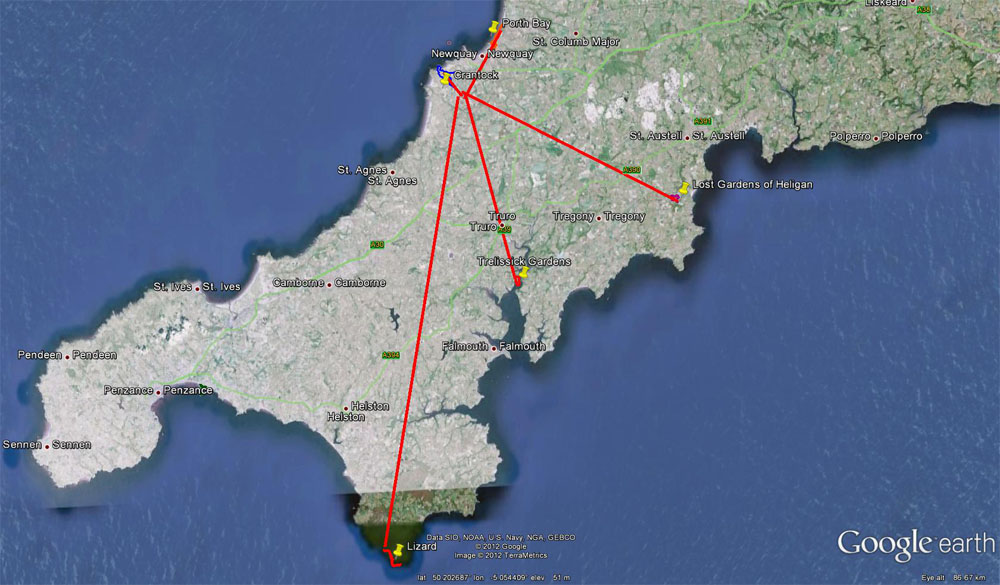