Wow have things changed in our lifetime.  Probably the only times we “had a disagreement” when out with our caravan was during the time we took to erect the awning,  Put simply neither of us had enough arms and they were always too short.  We had long since given up the idea of a full awning and resorted to a decent sized porch awning but we always had problems putting it up (and no doubt were the source of entertainment for many fellow campers)  Those were the days…..

Enter the new evolution of blow up awnings – Most manufacturers now offer inflatable awnings in full and porch and after reading lots of reviews on the various offerings it seemed to us that Kampa appeared to be the most popular and have the most experience we decided to try the Kampa Ace Air 400.   It was a toss up between the Kampa Rally and the Ace however at the end of the day the wallet won as Yorkshire Caravans had better deals on the Ace than the Rally.  To put things in to context one or two reviewers made negative comments related to delivery, lack of stock and for some reason condensation.  To us that really wasn’t a review of the product.  As you would expect there are dozens of models all claiming their features were better than anyone else.   To us we liked the idea of a single blow up point.  We liked the idea of being able to isolate each tube in the event of a leak.  We liked the ability to replace a single tube if necessary.  Condensation is not specific to Kampa – I can remember years ago when our Isabella showed condensation.  At least Kampa have a part solution – a roof lining.  Another point in Kampa’s favour is the Limpet system.  Nobody has really solved the problem of gaps between the porch awning sides and the caravan.  Large pads and poles have been the norm whereas Kampa Limpets actually fix the awning side panel to the caravan side very effectively reducing the chance of rain and wind blowing through without drilling holes in the caravan.   And you are free to add more Limpets if needed.  To be clear the Limpet system will only work on caravans that have smooth side panels.  If your sides are ribbed or mottled then the Limpet system won’t work.  The Limpet system isn’t a Kampa awning specific accessory – Limpets can be fitted to any awning if you purchase a hole puncher or buy the full Limpet kit.

As part of our deal with YC we opted for their package which included the Breeze electric inflatable pump and the LED strip lights.  I notice from the 2017 brochure that Kampa have replaced the electric pump with an “improved model” and while it is fair to say I haven’t tried the new model it has to be better than the Breeze.  Forget the fact that there were no instructions (after all you simply is switch on and pump up – right?) I did find it fiddly and it took a few minutes to figure out why it wouldn’t work.  Once you understand the workings it becomes easy.  First of all you have to tell the Breeze what pressure you want and after that it works fine however each time you unplug the power it looses the setting so you have to go through the process again.  Another point to note is that it is actually quicker to pump up the awning using the manual pump though obviously not as tiring.  I had thought that the electric pump would be quicker than it is – perhaps the “new and improved” version gives out a higher volume of air.

I was also surprised how heavy the Ace 400 is and that is because the Ace has the heavier duty material and the 400 is the second largest awning.  We slid the awning into the rail pretty easily and maybe in time we will need to remove the panels first to lighten the weight and once lined up all you need to do is connect the pump and away you go.  The book advises that you peg down the two sides first but we didn’t see the need and within a couple of minutes the awning was all up and ready to be pegged down.  The guy ropes are all ready attached so again easy to peg down and the storm guy fixing points are built in though the ropes themselves are extra.  We had storm guys from our previous camper and we were pleased that they fitted a treat.

We have a couple of Isabella floor covers so didn’t need the Kampa offering.  This was fine except that the Ace has a bay front so the flooring doesn’t quite fit but it didn’t worry us and we do have a second 4 x3 meter sheet that i could cut up if I became that bothered.  The LED strip lighting is a brilliant piece of kit.  All Kampa awning made after 2015 have the LED fastenings built in so it was a simple job to attach the strips using the velcro fasteners.  Each strip (if you have more than one) is simply connected using the included wiring loom.  You do need a 240 volt or 12 volt socket though and the whole system is controlled via a remote control with the option to dim or increase the brightness.  The effect was excellent and I can highly recommend these units.  One note of caution though they do appear to be fragile so you need to be careful where you store them. 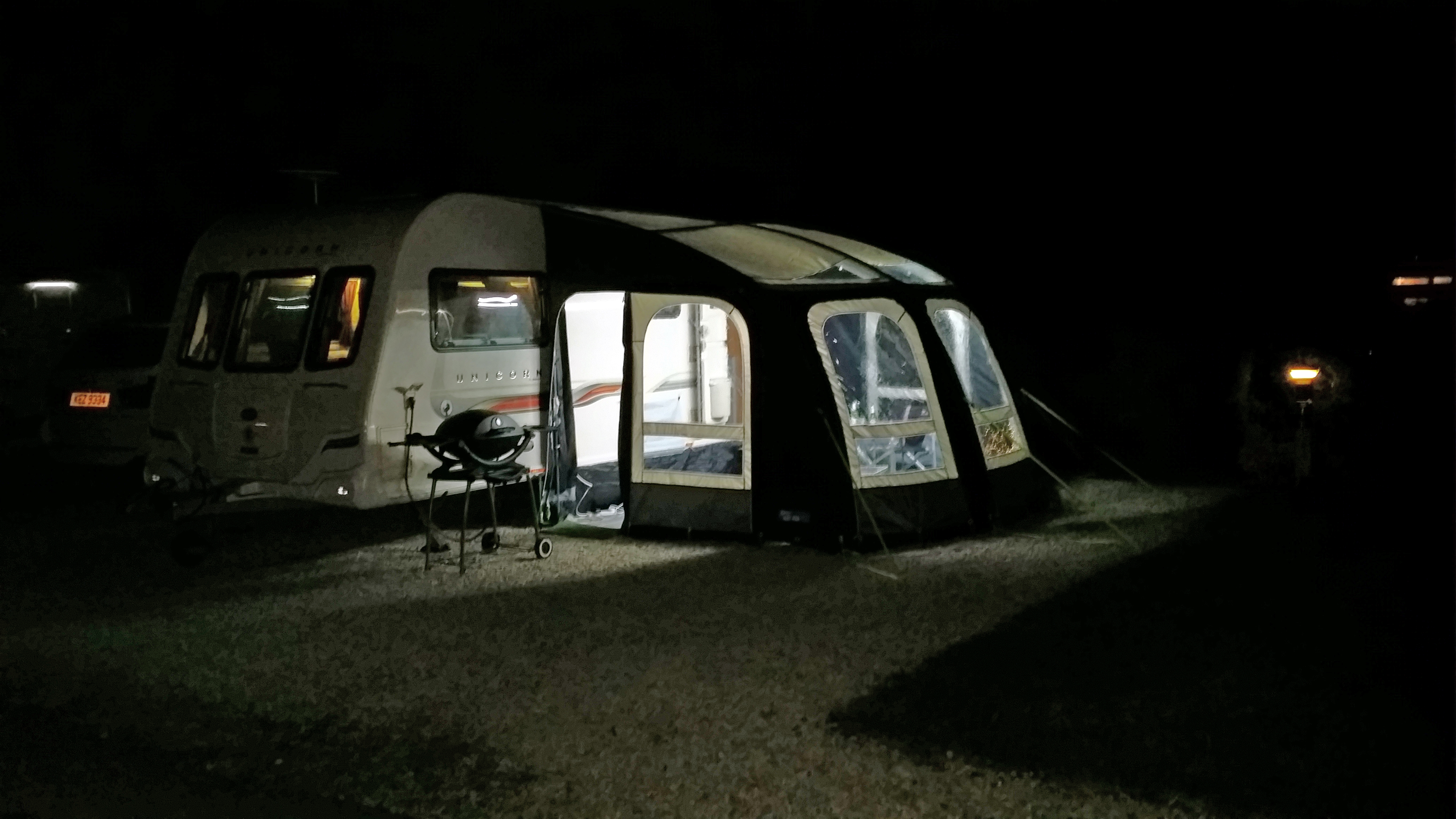 Taking the awning down was just as easy as erecting it.  Remove all pegs, open the air valve and then remove from the rail.  Both the manual and electric pump can be used to deflate the tubes and I recommend you do this to help with packing.  They do supply a generous sized bag but in every awning we have owned they are never big enough and this is no exception so kneeling on the awning to make sure all the air is removed works.