After a good summer (for UK that is) and a number of trips around UK we decided to head off across the channel for our usual Autumn trip however this year we have to be careful on timing as we want to visit our family in October/November to see our new grandchild.  So this was to be a short trip of two weeks or so giving us time to sort out the garden etc. before setting off again for Carcassonne.

We drove down to Folkestone for a Eurotunnel crossing with thanks to Tesco.  After arriving around an hour early we were pleased to be offered an earlier crossing at no extra cost. This gave us the opportunity to modify our plans and instead of spending the night at Escalles on Camping Les Erable we decided to tank up at Auchan and head off to spend the night at the Aire at Bergues.  We hadn’t been there before and found it a nice quiet spot just outside the 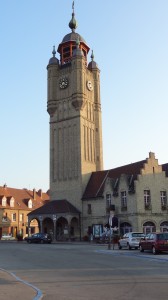 town walls and close to the centre.  After parking up we went out to stretch our legs and explore the town before having our evening meal.  We walked around the outside of the city walls and realised they almost completely circumnavigate the old town with a canal running along one side.  Bergues is a nice place with several cafe/restaurants in the centre and we enjoyed sitting outside one of the bars with a cold beer just watching the world go by.

The following morning after breakfast we headed off to our next stop – Trier on the river Mosel.  We arrived mid afternoon in sweltering heat of 32 degrees.  We have been to the site at Trier several times over the past few years and use it as a starting base to explore the area.  We spent several days here exploring new areas by cycling along the river towpath in both directions.  Our plan was to cycle in the morning and relax in the afternoon as the temperature reached a scorching 32 degrees by mid afternoon. One new place we were impressed with was the town of Saarberg.  This is on the river Saar that runs into the Mosel at Konz.  For us it was our longest cycle ride completing some 58 kms by the time we returned to Trier.  That said I must say that it is all flat as we peddled along the river bank. 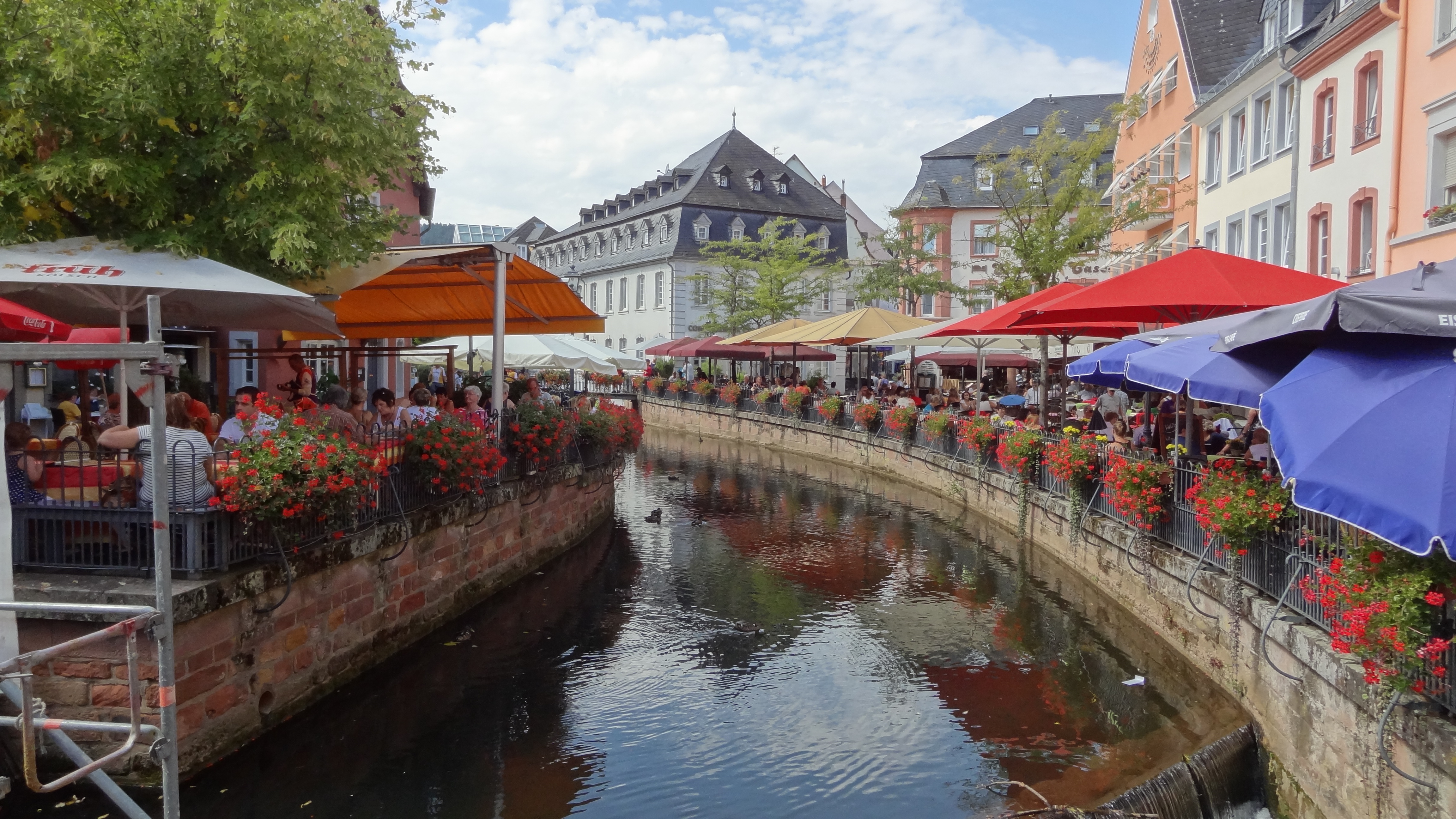 Saarberg has a castle and old town with a marvelous square with a river running through the centre.  Both sides of the river were completely covered with tables full of lunch time diners/drinkers and coffee drinking “people watchers”   Here we had lunch before walking up the narrow path to the small church and on to the castle where there are superb views of the surrounding area.  For those that aren’t keen on walking up hills there is a chair lift that goes even higher though we didn’t try it.  After another coffee we set off back along the opposite side of the river giving us a different prospective of the Saar river and as the temperature was again up in the 30’s we took our time with frequent stops.  The 50 km marker was conveniently located by the side of a riverside campsite called Camping Horsch.  Here they had a very friendly bar/cafe/restaurant where we downed a cood bier before setting off on the last leg.  As we were on the opposite side of the Saar we had to cycle down on the opposite bank of the Mosel before being able to cross over back into Konz for our last few miles to Trier. 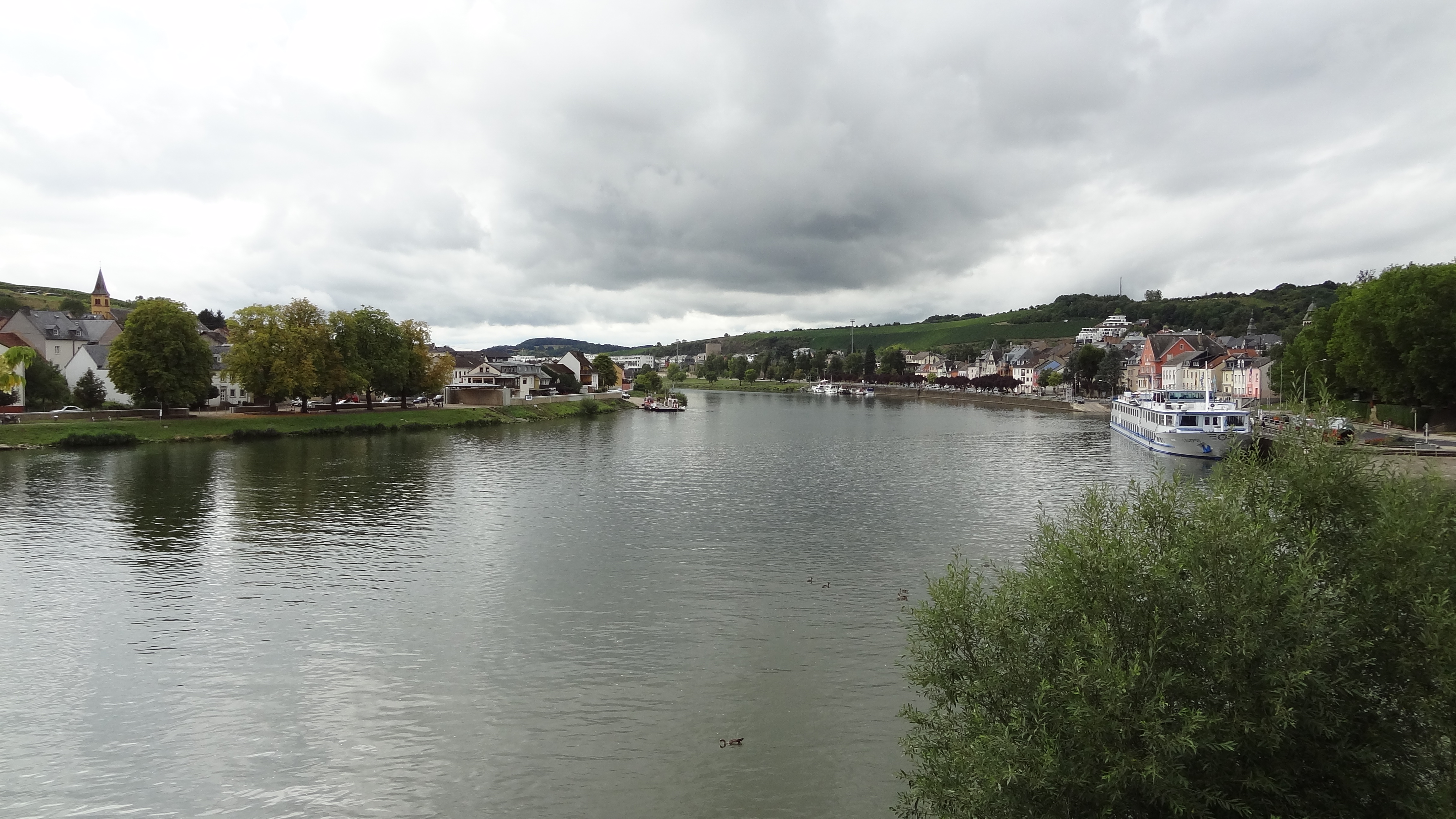 The following day we cycled upstream to the German – Luxembourg border which is marked by the exit of the Sauer river entering the Mosel.  A very pretty spot where you can view both sides of both rivers with the small car ferry making journeys across the Mosel between Luxembourg and Germany.

We spent another couple of days in Trier just chilling out as the weather was great with clear blue skies and temperatures in the high twenties and low thirties before moving on to Mehring.  Now you will see in these pages we have been to Mehring several times over the last 7 years and we took it for granted that we would simply roll up and take a pitch right by the river.   Not this time.  On arrival the site was full with campers parked in the hedges, presumably waiting for someone to leave.  We tried the site next door and after driving up and down the rows we managed to find a spot for the night.   Having settled in we went for a stroll to “evaluate” this site and while we still prefer our old favorite next door it was a good alternative.  Our favorite just seems a little more “polished” than here.   Its only downside was that they don’t do take away in the restaurant and that meant that we couldn’t have chips with our BBQ.

We spent the next five days continuing to cycle up and down the river visiting new and old haunts.  That was until Annette’s cycle chain broke.  Fortunately we were just over a mile from the camper so not too bad for pushing the bike.  The following day we caught the local bus into Schweich where a local cycle shop sold us a link to repair the chain.  We decided to walk back the 9 kms all along the vines overlooking the river.  We even picked a rucksac full of windfall apples along the way.  After repairing the chain we took a test ride into the village where after some 2 kms Annette picked up a puncture.  Not her holiday where bicycles are concerned.  We had been carrying for over 5 years one of these cycle repair canisters.  It consists of a preshurised canister filled with a green gooey liquid that fills the innertube and blocks the hole.  I never really expected it to work but lo and behold it worked a treat and we were able to cycle back.  It worked so well in fact that it oozed out of all the cracks in the tyre sidwall.  Need to get a replacement now. 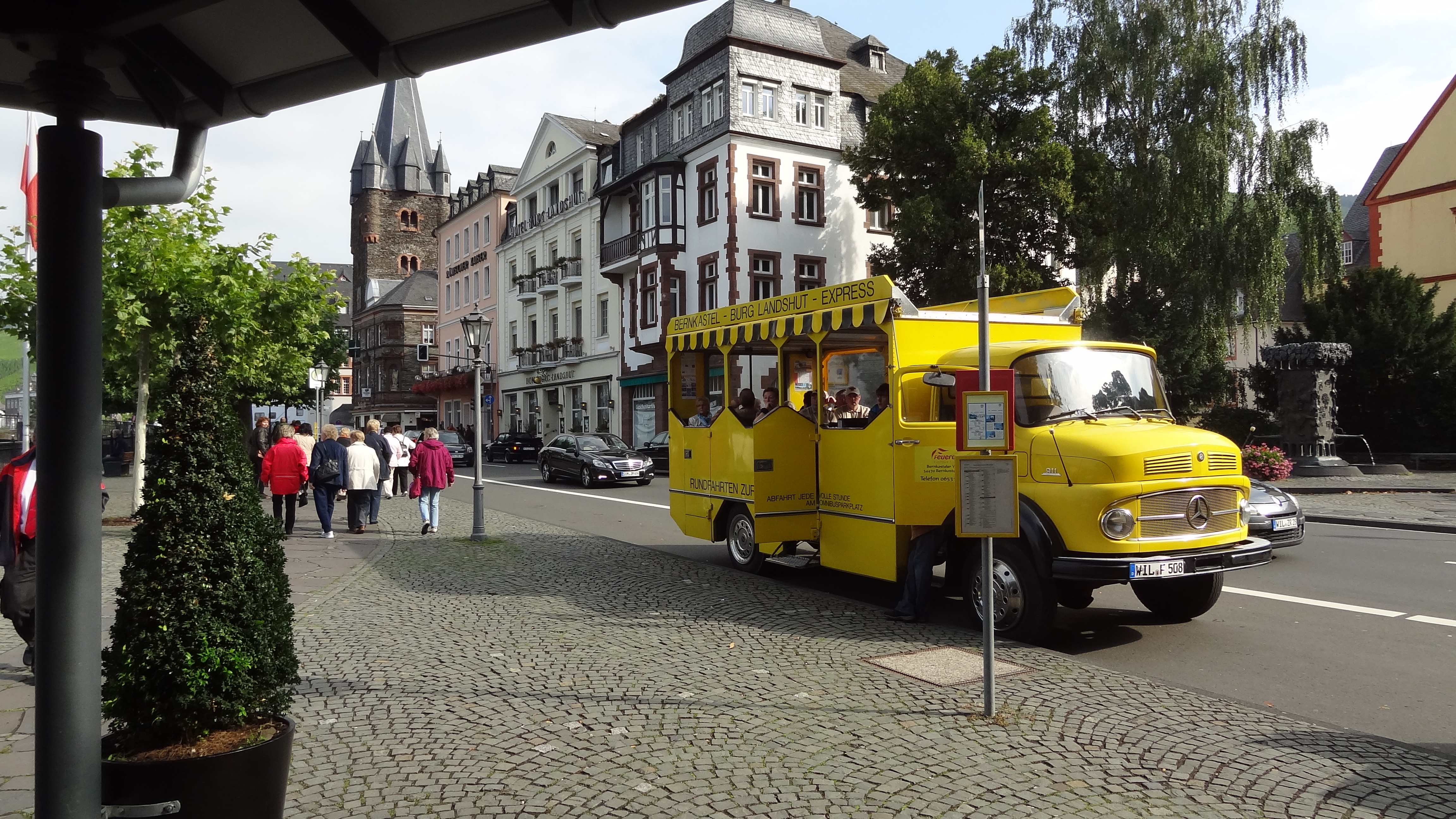 We decided to move on to Bernkastel but noticed even when cycling that all the Stellplatz were full  so we elected to try and find a different one.  While driving along we stumbled on the village of Brauneberg and spotted a small site overlooking the river and decided to jump in as we could see one free space.  Brauneberg turned out to be a good find as there was a supermarket next door to the site entrance and the site had all facilities on hand.  We did manage a day in Bernkastel but it was under cloudy skies with the ever threat of rain.

Unfortunately our last day at Trier theg the weather had changed and we had three consecutive nights of thunderstorms with heavy rain and this pattern continued on to Brauneberg where it rained very heavily all day turning the ground into a swamp.  The temperature dropped over twenty four hours from plus thirty two to plus twelve – a real shock to the system.  The rain continued and never let up so with a forecast of rain to continue for the next few days we decided to up sticks and head for Brugges in Belgium. 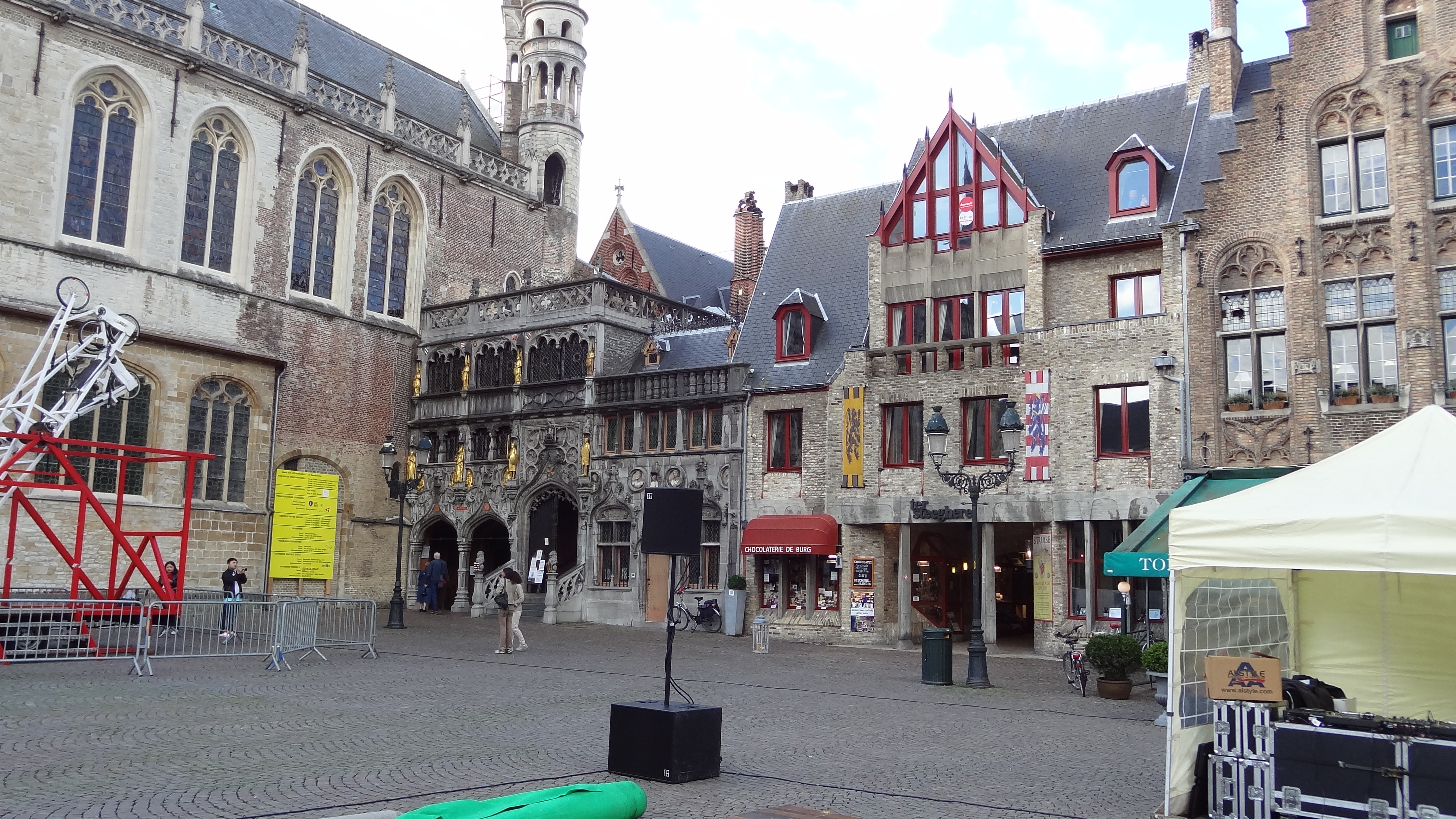 We had mixed weather in Brugges with heavy rain and a little sunshine, however with a dismal forecast we decided to set off home and after a night at Les Escalles we boarded the train and arrived home mid afternoon.