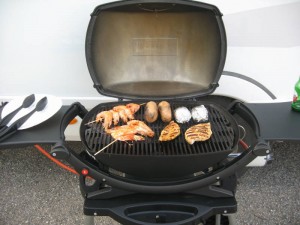 I love to experiment with different food however I hate the cleaning up bit.  My ideal BBQ would be a self cleaning, folding, lightweight BBQ with a solid iron grill that would fit in a cupboard yet be capable of cooking a meal for up to 20 people.  Now I accept that such a beast does not exist.   I will just say that my views on types of BBQ have changed over the years.  I have gone from a strong belief that only charcoal should be used to preserve the flavour to using gas as I really can’t tell the difference.  Over the years we have had several BBQ’s moving from charcoal with and without lids, to gas including lids and even one I bought in the USA 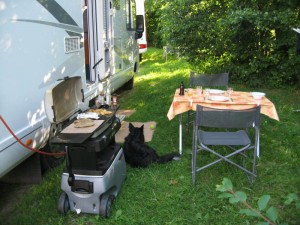 We have tried suitcase BBQ’s, multi-purpose ones with reversible grills but at the end of the day they only last a couple of years heavy use before something rots/wears or burns out.  The Americans and Australians really know how to make BBQ’s and I wish more of their models were available in Europe.  The Grill 2 Go was a great BBQ but it was heavy and bulky and even though the grill retracted into the base it was still a large beast to move around – it weighed over 40kgs empty.  It had a cool box under the grill that was handy for keeping wine or beer cool while BBQing.   If I’m honest it was more of a home BBQ than a touring one but then we had the space and available payload….  It met its demise tragically when I squirted oven cleaner on the grill and left it for 3 hrs instead of 3 minutes and it lifted off all the Teflon non stick surface making it impossible to use. 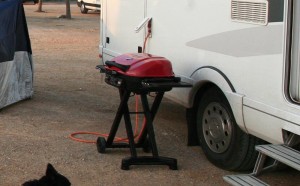 Our next BBQ was more of a spur of the moment buy as I had messed up the Grill 2 Go and we were shortly to leave on our summer trip.  I wanted something similar to the last one but not as heavy and not as bulky.  There seemed to be little on the market that suited until I came across an article in Gardeners World where they had been reviewing BBQ’s and the winner appeared to fit the bill.  We contacted the sales office and they agreed to dispatch it so we would have it in time for our trip.  To be fair the BBQ was as described and was much lighter at around 10kgs but I couldn’t live with the wire grill (remember at the beginning I said I was fussy).

In my opinion the wire just doesn’t retain the heat like a cast iron griddle.  Being a thin gauge wire all the juices drip through on to the burner too easily and cause lots of flames to flare and smoke the food.  Food such as prawns or weggies or sliced mushrooms drop through too easily.   When you turn it off the grill is cold in next to no time so you can’t keep the second course warm without keeping the gas on low.    We used it for that holiday and then sold it on without any trouble and without loosing my shirt.   Over the following winter I spend a lot of time researching what was on the market and finally decided on the Webber Q220 and never looked back.  It is by far the best Portable BBQ we have ever owned.   Fairly light, detachable base/trolly with cast iron grid and twin burners.  We even have the optional solid griddle so we can co 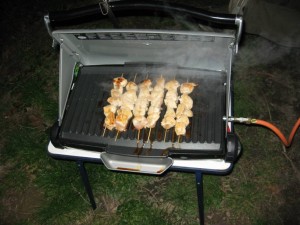 The suitcase BBQ is great for those with limited space as it folds up to a laptop computer size and weighs around 5kgs.  It differs in cooking from the lid type BBQ in that you can’t use the lid to retain heat.  That said it does have shields on three sides and is very easy to keep clean and easily holds enough food for four healthy appetites.

The secret of cooking food properly on a BBQ irrespective of the type is to make sure the BBQ is fully heated up.  So with charcoal BBQ’s make sure the briquettes have turned white before you start they will continue to give off heat for hours after so don’t think white equals running out of heat.

If you start to cook while the briquettes are still back then you run the risk of impregnating the food with unburned fuel and it can really affect the taste.  When using gas give it plenty of time to heat up – at least 15 minutes or more depending on the number of burners you have.  You can always control the heat afterwards.  Cast iron grills take more heating up than wire grills.  Solid cast alloy griddles also take longer to heat up.  Open BBQ’s – those without a hood,  will need a higher heat setting than those with a hood.  Good pre-heating will also burn off any residual food from the previous BBQ so is more hygenic (even though you may have vigorously cleaned it after the last outing – there is always something left behind)

Our current model, a Webber 220 with the black cast alloy lid, purchased last year is in my opinion, the closest yet to my ideal.  I have even gone up in our friends social ratings as we have matching black BBQ tools.  The 220 comes with a detachable folding trolley and plugs into the outside BBQ point on the camper so there are no gas bottles to lug around.  It has a cast iron grill (the heaviest part of the whole thing) and I included the optional cast iron griddle to complete the experience. 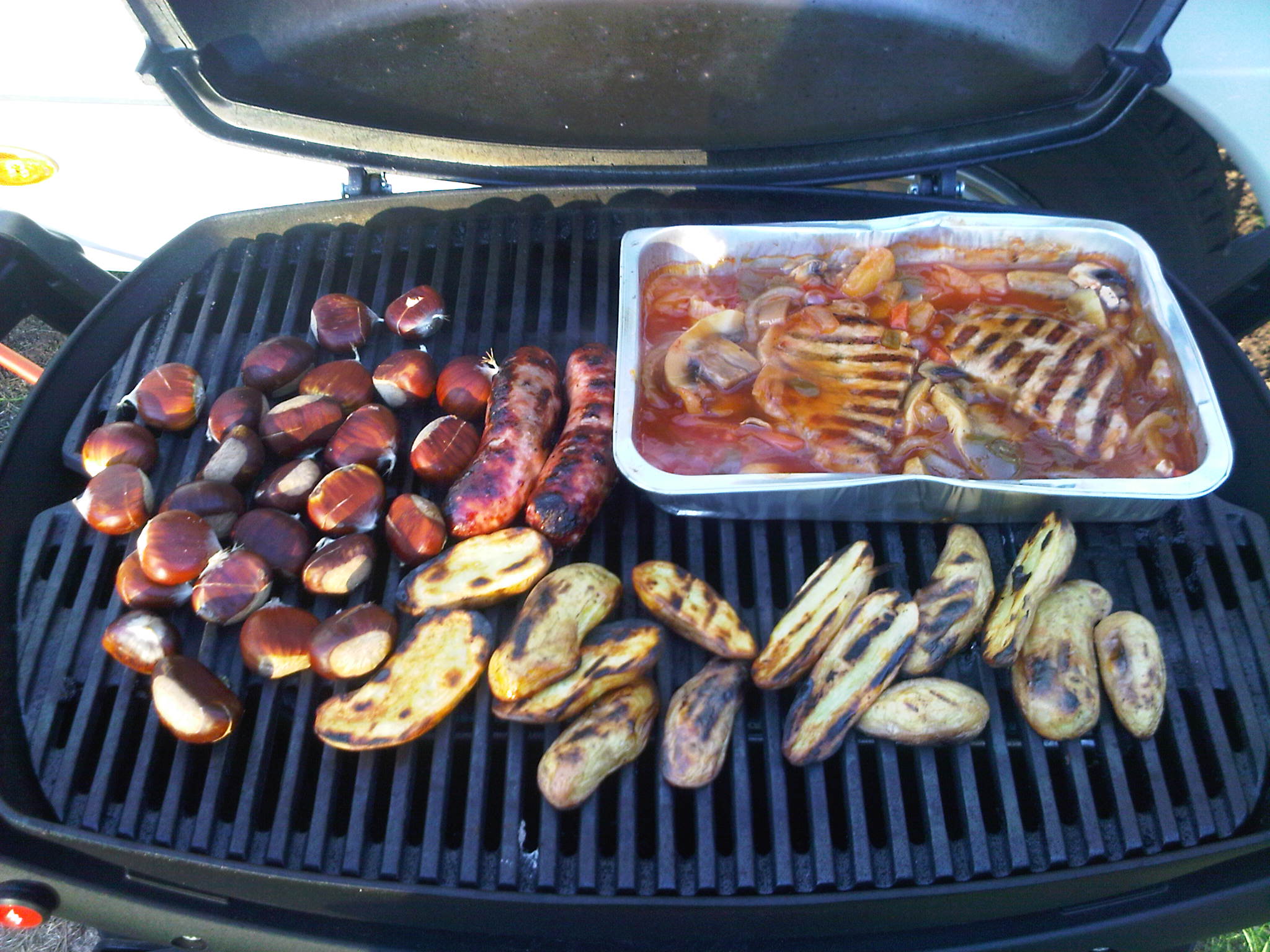 My philosophy with cooking on a BBQ is that as you have gone to the trouble of lighting the thing you might as well use it to cook all the meal and not just the meaty bits.  We usually cook the starter, then main course and eat it while the desert is simmering away.

Hopefully over the coming weeks I will pass on some of the recipe’s and cooking methods that have served me well over the years, recipe’s that I have picked up during our travels in the USA, Europe and Australia.

Foil Trays–  The fun part of BBQ’ing is experimenting and some of us would agree that there is no such thing as spoilt BBQ food.  It might look burnt to a crisp but BBQ aficionados will tell you “we like it that way”  Marinades really add flavour to any BBQ but they do cause a mess.  One method I have adopted is to use foil trays.  The idea is to cook the food first, while cooking the marinade ingredients in the foil tray then adding the sauce and meat in the final process.  An example is in the photo above, where I grilled pork fillets, sliced mushrooms into the tray with olive oil, added herbs and cooked these for a few minutes before adding chopped tomatoes and garlic, a spoon of honey, a spoon or two of soy sauce and finally adding the pork to finish off.

Baco Foil –  I use baco foil sheet to protect small items from falling through the grill.  Spray Olive oil onto the sheet to prevent sticking, then place either prawns, sliced Aubegines, mushrooms, sliced herb potatoes on to the sheet and they cook just the same without the hassle.  Another tip is I always cook lamb chops on baco foil as it prevents flames rising up to spoil and blacken the meat long before its properly cooked.

Spray Bottles – We like using Olive Oil when cooking as it adds flavour, helps to stop the food sticking to the pan or grill.  One problem is that pouring oil can be dangerous not to mention wasteful.  I’ve tried using One Cal sprays but they aren’t the same and you loose the taste.  We have bought a plastic spray bottle that we can keep refilling with oil.  Be careful though that you don’t buy a spray bottle for water as the oil sticks and clogs up the nozzle.  There are dedicated oil spray bottles from places such as Lakeland or if stuck then use a bottle from a garden centre.  Ours came from Tesco at £1.99